That will never show our television - Frontex reveals people smuggling

That will never show our television - Frontex reveals people smuggling

The European border and coast guard Frontex has filmed tugs in the Mediterranean.

Sometimes pictures say more than words - even though there is the possibility of manipulating pictures, it is still important who makes and publishes these pictures. But this must be true Frontex was shown himself. 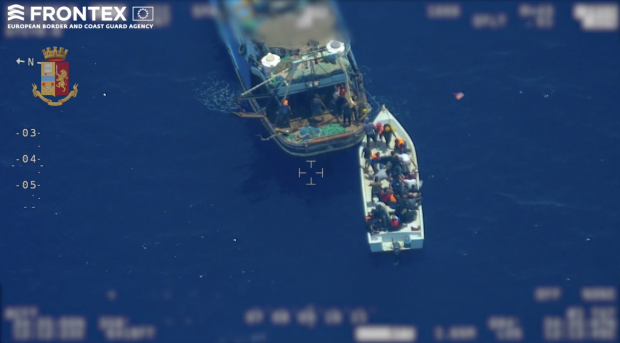 This video has been published by the International Border Guard Frontex, who, as a neutral observer, are more apt to believe them than if they were filmed by some obscure political figure. The video in the article with even more infos ...

"Frontex" is the name of the EU agency that coordinates the border and coastal protection of the EU member states. Frontex is thus responsible for the control of the external borders of the EU. The name of the agency is derived from the French frontières extérieures. Now Frontex officials have so far rather not with public criticism of migration ideologists such as Juncker, Merkel or Protestant Kirchentagsveranstaltern in appearance. So far Frontex has not been known to counteract the political-media misuse of the term "refugee" or a misleading discourse on "distress" situations. However, this may change gradually, along with the growing importance of Frontex. Even the curious seat of this EU border agency in Warsaw promises a certain mental distance to the Brussels Death Star, which can only contribute to clear thinking. In the East of the European continent, one might never understand why arbitrarily large waves of the literally tens of millions of surpluses of young Africans willing to migrate are to be settled in Europe - even under the false label "Refugees", full of our governments. Last weekend, Frontex's official Twitter channel released a one and a half minute video that Angela Merkel would probably call "unhelpful." The Frontex Twitterer consistently uses factual and sober the correct generic term "migrant" instead of "refugee" (in English: "migrant" instead of "refugee"). Even in the face of this true-to-the-tongue language, German journalists are likely to catch their breath. Where is the obligatory "refugee" framing, in the context of which government criticism has to expire?

Most interesting is the observation that Frontex made in the Mediterranean three days ago. The Border Guard observed a trawler carrying an old, empty wooden boat. Initially more out of curiosity, the Frontex people stayed with the camera at the boat and made a pretty impressive video. So it is a great educational unit to bring the reality of the type of "Refugees welcome" Grölers and "Fridays for Future" runner. In the video, Frontex's own aerial photographs document how tugs on the open sea allow their clients to transfer from a fish steamer to a specially towed empty wooden boat. Then the tugs get away. This artificially creates "distress". And the traffickers who squeeze themselves onto the boat are waiting for the decisive onward transport to Europe, which in Germany is only called "sea rescue". For Frontex, this process is the typical procedure on the Mediterranean route: a "mother ship" carries a small, empty boat with it at first, then on the high seas the "refugees" are transported by the human smugglers into the small boat, leaving themselves to their fate. The human smugglers are returning to North Africa to take on board the next sweep of "refugees". Anyone who wants to know this knows that the "rescue of the sea" in question is only necessary because "distress" is artificially and systematically generated by criminals in anticipation of this "rescue of the sea". And the "distress" is artificially generated only because the "sea rescue" in the Mediterranean always includes a passenger transport to Europe - not about the ethically appropriate and quite feasible restoration of the initial state, so the return to Africa. See for yourself:

"The case of a 'mothership' that criminals use"

Below is a translation of the message strand that Frontex used to comment on their own video on Twitter:

"Just a moment. Why does this fish steamer carry an empty wooden boat on the high seas? Frontex experts spying on him from the air suspected why. And indeed, after a few hours, a steady stream of people emerged from under the steamer's deck and went to the smaller boat. When 80 people squeezed [on the wooden boat], the steamer pulled away quickly. The migrant boat then began slowly heading for the Italian island of Lampedusa.

This was clearly the case of a "mother ship" that criminals use to carry a large group of migrants across the ocean towards their destination before transferring them to a smaller boat. A Frontex aircraft and a Frontex drone watched the steamer and boat with the migrants for several hours; They informed both Italian and Maltese authorities and @EUNAVFORMED_OHQ [EU military operation in the Mediterranean].

According to Frontex, the Italian Coast Guard then tracked the fish steamer and arrested seven people smugglers. The boat with the African migrants was intercepted in Italian waters. About the inmates is no longer communicated. "Notice," Frontex concluded for the time being, "how few of the people squeezed into the squat wooden boat had lifejackets when left alone in the middle of the sea."

One of the most interesting information about the incident was submitted to Frontex yesterday. As a result, most of the migrants in wooden boats come from three countries. There are, in the order communicated by the Frontex Twitterer: Bangladesh (!!), Libya and Morocco (!). Everyone can draw their own conclusions from this.

Sometimes pictures say more than words - even if the possibility of manipulating pictures is extremely large. But when the pictures are published by the international border organization Frontex, as a neutral observer you are more inclined to believe them than if they were filmed by some obscure figures from the left-wing political scene. The fishing boat went with the wooden boat in tow constantly to the north, until it suddenly stopped at sea. As if on command, a considerable stream of people spilled onto the wooden boat from the fishing boat. When about 80 people, according to Frontex, were jostling in the small boat, the cutter cut the rope and left for North Africa. The wooden boat with its human cargo kept chugging towards Lampedusa.

In a combined action by Frontex and the Italian Coast Guard several prosecutors were arrested, according to the prosecution. "Il Giornale" shows in a video how "fishing boats" are transhipped from a fishing boat just outside Lampedusa Now "Il Giornale" is known as a particularly Lega and Salvini-friendly (belongs to Berlusconi), but the report about this combined action by Frontex and Italian Coast Guard is interesting. At least nine tugs were arrested, according to the prosecutor Agrigento.

„Now the smugglers use fishing boats to tow the small boats to the limit of Italian territorial waters and then transfer migrants to these small boats.“

, writes "Il Giornale". According to the Italian Ministry of Internal Affairs, all were charged with promoting illegal immigration.

„The operations were coordinated by Public Prosecutor Luigi Patronaggio, Salvatore Vella and Deputy Cecilia Baravelli. The police identify and interrogate the migrants. Meanwhile, the Ministry of Interior has announced that the ship has been confiscated. (...) The situation was also monitored by the state police thanks to an aircraft provided by Frontex.“

The seven tugs aboard the fleeting mothership - six Egyptians and one Tunisian - were arrested. The mothership (fishing boat) places the previously hidden under deck migrants in the "ghost ship", which is forwarded towards Lampedusa. On the return journey of the mothership towards Africa, the investigators then beat. According to "Il Giornale" the intercepting ships are ships of the Guardia di Finanza.